FM17 – Arsenal (Behind The Scenes)

The brief delay of this post is down to three things: 1) Having to work too much, 2) Stellaris and 3) Starting a new Football Manager game as an unemployed chump.

But back to Arsenal, where I’ve become aware that the squad is too big. It’s very difficult to keep so many players happy with sufficient playing time, especially now that the early season injury problems are resolving themselves. I’ve reduced the squad statuses of several players down to rotation instead of first team, but I don’t think it’ll be enough. If not for the great work Per Mertesacker’s been doing convincing squad players to drop their concerns, I’d probably have a very unhappy squad on my hands.

Still, despite his heroic efforts, I will need to let some players go. Gabriel has decided a move to China is what he needs, and even Per’s intervention doesn’t help. I agree to let him go, provided they bid at least £23.5m. Carl Jenkinson will be loaned out in January as he hasn’t played a single minute so far and Rob Holding might be too, though he’s being tutored by Shkodran Mustafi at the moment.

In midfield, I will probably have to choose between Xhaka and Elneny at some point, and with Danny Welbeck returning from injury soon, and Jeff Reine-Adelaide making great progress under the tuition of Alexis Sanchez, I suspect an attacking midfielder will need to move on too. At the moment Lucas hasn’t convinced me much, outside of his abilities with set pieces.

A lot of changes have happened staff wise this year, and we’ve added to our coaches again, including the great Dennis Bergkamp. 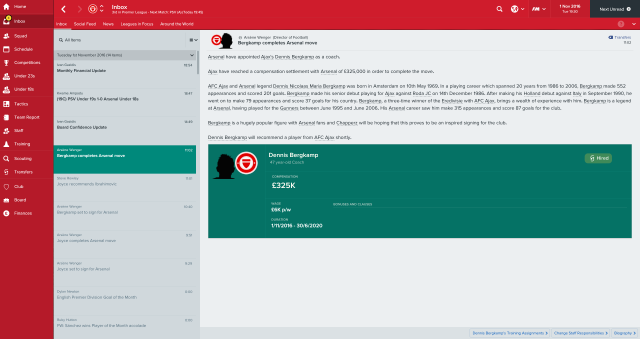 We’ve also bolstered our medical department, and the scouting team has been expanded with four new additions.

In great news, the board have agreed to improve both the youth and training facilities, which should be ready by October 2017. And then they provide more cash for player purchases.

Unless the scouts unearth some gold, I’ll probably sit on the cash until summer, as adding players to an already unwieldy squad might not be the best laid plan.

The tactical changes alluded to in the previous post are relatively minor. We’re going to try Ozil as an Enganche instead of an Advanced Playmaker, try and exploit the centre, and boost the teams creative freedom in an effort to get more from him. Also, whichever striker plays will have an attacking mentality to be in a better position to receive potential through balls. Hopefully.

On paper, the December fixtures look good for a bit of tactical experimentation, although Man United away loom on Boxing Day. First up is Burnley at home…

This entry was posted in Gaming and tagged Arsenal, FM17, Football Manager 17. Bookmark the permalink.

2 Responses to FM17 – Arsenal (Behind The Scenes)