Restrictions: Can only sign players who are transfer listed, loan listed or found by scouts.

The mid-week games are starting to take their toll on the squad. Fitness levels are slow to recover, and we’re starting to get more minor injuries.

A rare tactical switch in this one, with 20 minutes to go, we switch to an attacking, direct 4-3-3, and grab a 90th minute equaliser.

With injuries, suspensions and fitness concerns, we have to chuck in some reserves. 2-0 down at the half and we switch to 4-3-3 again. It works a treat and we lead 3-2, but can’t hold on. Glad to have found an attacking tactic to change games though.

We sign Shaun Carey (MC) on a 3 month “prove it” deal to add depth in the middle of the park. And then promising 15 year old Adam Fleming (AM/FR) from Ireland.

We completely dominate, but Big Dave Seaman (player-manager) is just too good.

And Exeter are down. In March.

The win over Macc gives us just a slim chance of sneaking into the play-offs, but with six games left, it’s a big ask. Only six points seperate us from 17th placed Rushden, so I’d be very happy to maintain a top ten place. 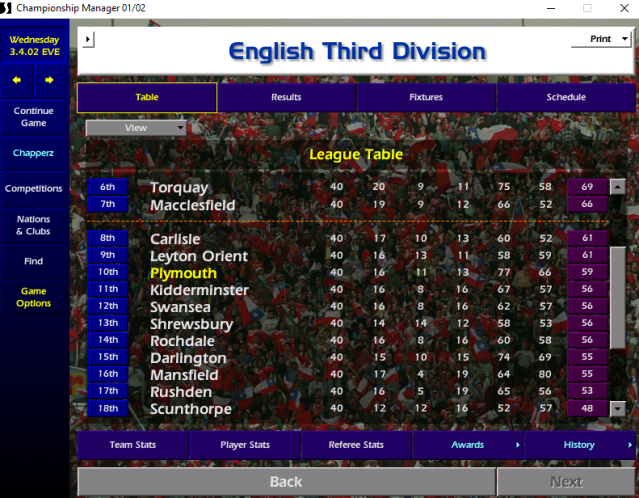 Smyth has taken advantage of Sveinsson’s injury and deservedly usurped his place up front.

A Monday night game, just two days after the Orient match leaves me no choice but to make eight changes. The back-ups done good.

David Friio caps his final home game with a straight red card. For dissent. After TWO MINUTES. Somehow, despite being under the cosh for 88 long minutes, we steal the win. But, despite our terrific run of form, with a game to go we’re 4 points behind Torquay, so no play-offs for us.

Another manager of the month award, and another young player award for Stonebridge lighten the mood a little.

This entry was posted in Gaming and tagged Championship Manager 01/02, CM0102, Plymouth. Bookmark the permalink.