Flight Of The Concords: Part 28

Posted on September 7, 2018 by fromelevenone

Welcome to Flight Of The Concords, where we’ve earned promotion to the Premier League! Things are real different up here…

In the real world, life’s been pretty hectic this last week or so (not in a bad way) and as a result the continue button hasn’t had much use!

Hopefully it’ll be business as usual next week, and Part 29 will contain plenty of Premier League football.

Prepare yourself for pre-season talk, heavily leaning on transfers, with a little on finances and ending with a spot of attempted player development…

Just look at this:

It’s quite different from where we started eh?

With youth facilities in the process of being upgraded and a new stadium under construction, we’ll be trying to stay well within those budgets. If things are looking OK halfway through the season, I’d like to upgrade the training facilities and data analysis facilities too, but we’ll see how we’re going.

As always, there as some players that must leave us, and these are the notable releases:

James Mulvenna has successfully left in a strop, and remains without a club. Michele Somma was only brought in as an emergency back-up, and Declan Morris has made zero progress. Another dozen youngsters leave, potential unrealised.

However, there are a couple of players worth busting the stats out for. Firstly, Robbie McKenzie – 123(38) Apps, 9 goals, 11 assists, 6.97 Avg. He was a good servant to us over the last five years, but his prospects would’ve been extremely limited for the coming season.

Ryan Longman – 78(60) Apps, 77 goals, 30 assists, 7.20 Avg. Sweet, sweet Ryan Longman. In six seasons with us, he’s scored some important goals (leading us to Checkatrade glory in 2022 was a highlight), and did some real damage coming off of the bench. But he’s not developed very much and after struggling in the Championship, it’s time to say goodbye. He had a good spell on loan at Carlisle last year, so hopefully he’ll find a club around League Two that’ll appreciate him.

We’ve splashed a little cash! I still hope to bring in a couple more bodies before the season starts, but this will be most of our business: 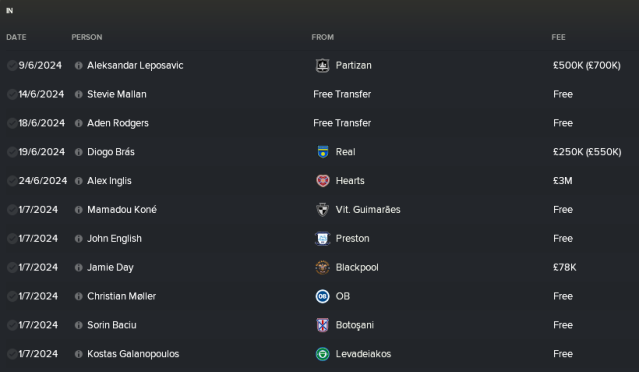 In terms of defenders, we’ve signed up Christian Møller, Sorin Baciu and Mamadou Koné, all on frees after their contracts expired. Koné looks like a versatile back-up player, but Møller and Baciu will be vying for first team spots. Centre back is an area I hope to add one more body to, as I don’t think Oliver Younger is up to Premier League football.

We have also extended the loan of Tottenham’s Arantes Graham for another year. Unlike a lot of my players, he’s made some strides attribute wise and will once again vie with Ilias Chatzitheodoridis for the left back spot.

As is my wont, I’ve brought in a few midfielders. I’ve been after Aleksandar Leposavic for quite a while, but just couldn’t afford him. He’s 18 years old and a promising playmaker: 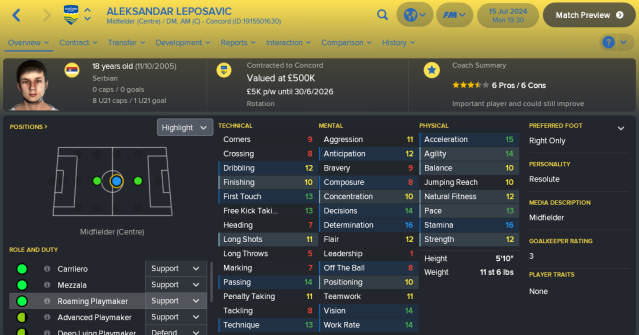 Stevie Mallan and Kostas Galanopoulos are also added to our pool of central midfielders, with the former offering guile and the latter, steel. Aden Rodgers is 18 years old and was available on a free. He has promise and I intend to tutor him until January and then loan him out.

On the wings, we’ve really struggled to find suitable additions. Diogo Brás comes in and looks like a good add, but I’m hoping we can find one more winger before the window closes.

Up top, one name sticks out above the others. John English belongs to us once again. Why did Preston pay us £600k, loan him back to us three seasons in a row and then let us pick him up on a free? I don’t know, but I’m glad to have him and give him a crack at the top tier.

Jamie Day has come in for a paltry compensation fee. He looks a decent back-up and at 22 years old may yet have some growth in him.

But I’m burying the lead! Alex Inglis becomes our record signing by a country mile! I would’ve liked to get him on more of an appearance/goal clause based deal, but Hearts were having none of it. We coughed up the £3m minimum fee release clause: 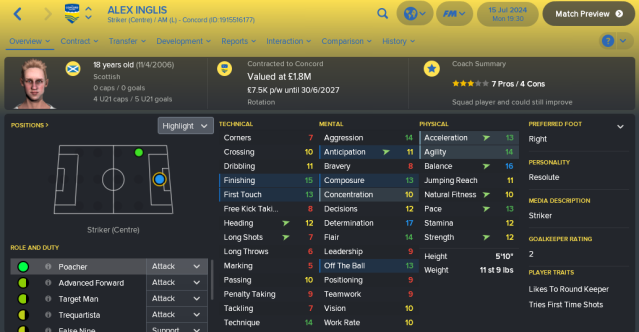 He ticks almost every box I have for a young striker, and comes equipped with one of my favoured player traits with “Likes To Round Keeper”. I really hope with a bit of first team football he can flourish.

There are a few more outgoings: 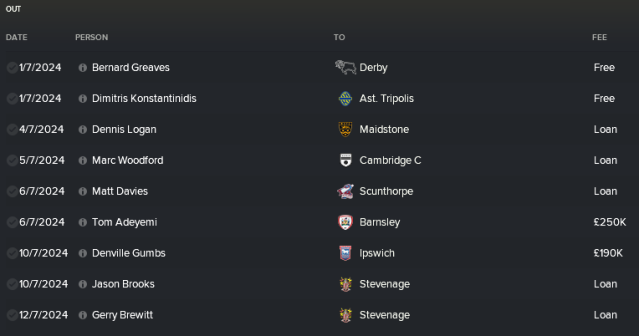 Bernard Greaves is another to disappoint with a lack of development, and is off. Dimitris Konstantinidis couldn’t displace Max Aarons, and having turned 30, goes back to Greece.

Five loans out so far, including Gerry Brewitt, who can hopefully kick on in his development with first team football.

I’m stunned and relieved to get an offer of £250k for Tom Adeyemi. He was very much a back up last season, and I forget to remove an extension clause in his contract, but Barnsley dug me out of that hole.

The big name to go is Denville Gumbs – 68(31) Apps, 48 goals, 15 assists, 6.96 Avg. He made almost no progress developmentally and fell down the pecking order dramatically last season. He had one massive season for us, winning the League One/Checkatrade Trophy double, spearheading our attack alongside Ryan Longman. He’s the first of my players granted a @wtforkgaming face to leave, and I fully expect to see it again in an important cup game, because that’s just how it goes isn’t it?

I’ve chosen a few players from our books that have been with us for varying amounts of time, to show how they’re getting on and our plans for them in the future.

You may be surprised to hear, I’m disappointed by his development: 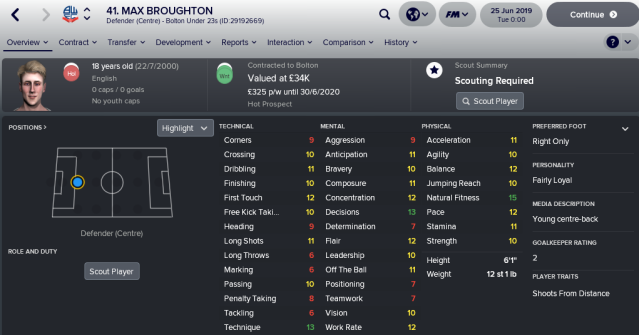 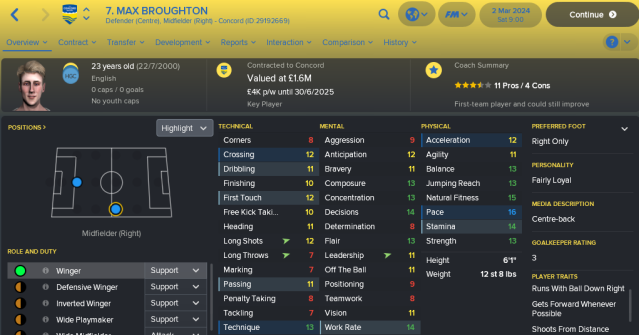 Don’t get me wrong, he’s been great for me for years and I love him. But developmentally, he hasn’t improved much technically or mentally. But his physicals have shown great progress and obviously his shift from centre back to right winger has been a great success.

Another player to make great strides physically (strength up to 14 from 6!) We’ve worked specifically on the attributes for the target man role to some success: 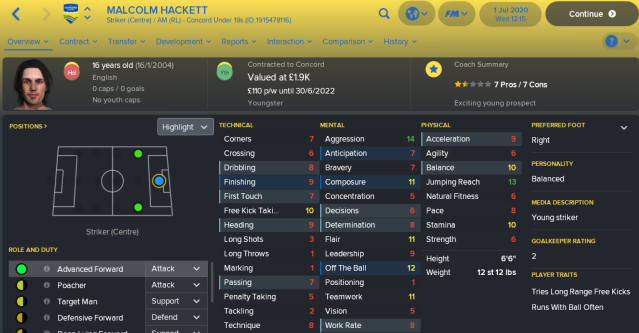 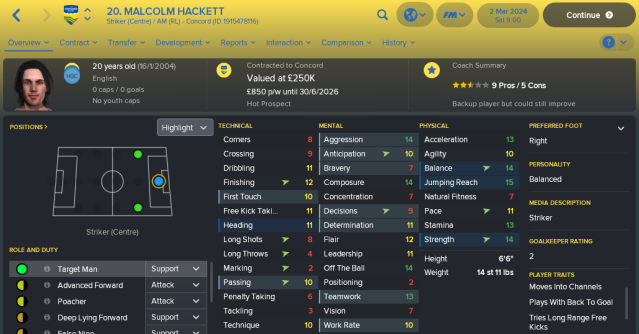 He was good when we used him off the bench last year, but I think he may need to be loaned out for first team football this year to continue his growth. He’s not ready for the Premier League and I don’t want to stifle him without playing time.

Definitely a theme emerging with the physical attributes: 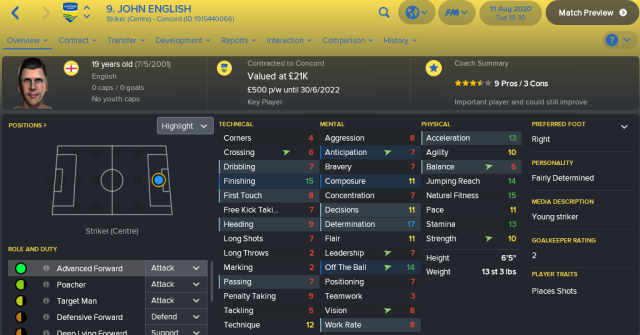 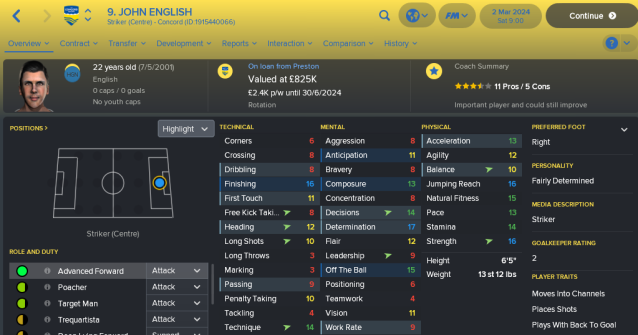 He’s adapted nicely to being a target man, and our specific focus on his heading and strength has yielded dividends.

Not mentioned before (I think) he’s come on more than I’d hoped: 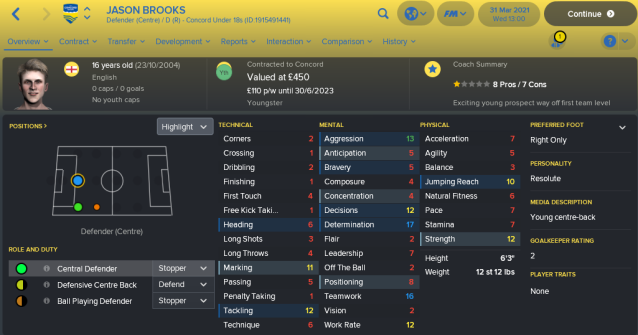 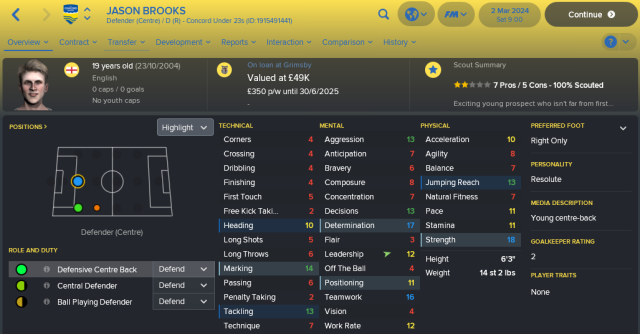 Hopefully another year on loan, at a higher level than before, might give him a push even further.

Another player being loaned out for development: 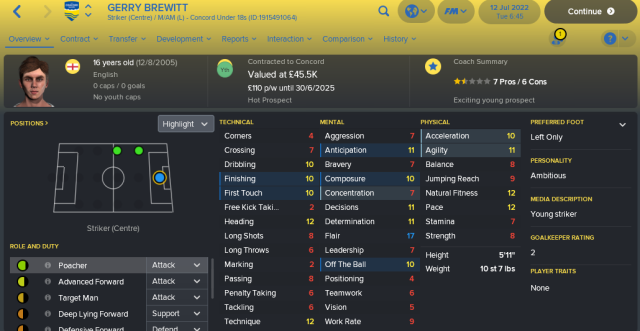 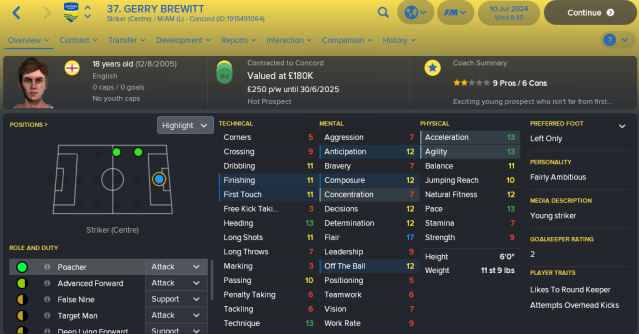 He’s grown some, and added “Likes To Round Keeper”. With his flair of 17, I couldn’t resist training “Attempts Overhead Kicks” into him. A waste of time? Perhaps, but you’ll damn well hear about it if he scores one!

He’s fresh from the youth “academy” this season, and is the first player outlined here to have significantly benefitted from tutoring: 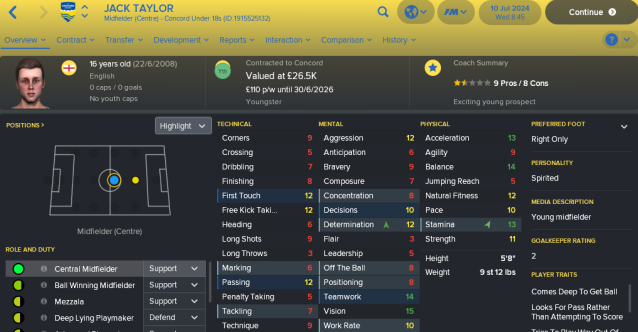 There’s work to do, but at 16, he’s got a chance. I see him more as a playmaker (especially given his traits), but will probably spend some time focussing on his defensive skills to round him out a bit.

Thanks again for reading, it was something a bit different today and whilst I like spending time on pre-season and development, I’m looking forward to going back to normal next time.

Right, I’m taking the lads back to the Algarve for pre-season, see you on the other side!

This entry was posted in Gaming and tagged Concord Rangers, FM18, Football Manager 18. Bookmark the permalink.

2 Responses to Flight Of The Concords: Part 28