Flight Of The Concords: Part 32

So this is how it ends. Not with a bang, but with the other thing.

That’s not entirely fair. Finishing 5th in our debut Premier League season, is a fairly decent bang. Europa League football obtained, and finishing above such heavyweights as Chelsea, Arsenal and Tottenham is no joke.

I really wanted a cup final or something to finish with style, but it wasn’t to be.

This will just be a quick conclusion, with a few final thoughts, and a selection of my favourite players and moments from the save.

How We Leave Concord:

Well, absolutely loaded for one thing:

Those years in the red seem a 108 million miles away.

Despite that, we didn’t go nuts with transfers:

Although three of these bad boys are wonderkids: 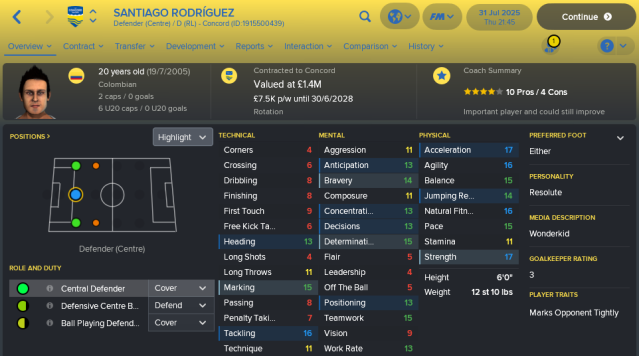 I’ve got as far as the Europa League draw:

Which would’ve been nice. We’re also just a month away from opening our new training facilities, which have taken so long to build, I was hopeful they’d be hella impressive. And we’re still nine months away from returning to Canvey and opening our brand new stadium (that we’ve already outgrown!)

Despite just being released on a free (and joining Championship Swindon), this was a no brainer. He joined us in our final League Two season, and was instrumental in three promotions over four years. He played 189 times for us and was an always reliable option between the sticks, keeping 69 clean sheets, averaging a smidge below 7.

One of our very first signings in July 2017, he was by far our most solid full back for years. Over his five seasons, he was a key component of three promotions, before leaving for Boston. 167(14) appearances, averaging around 7. He only added 9 assists with a solitary goal, but his defensive influence was vital.

Left back was a problem position for years, and it took until we got to the Championship to find a long term solution, signing him for £130k, which was a lot to us at the time. Since then, Ilias has fought off a number of signings, seeming to step up his game when faced with a challenger. 122(1) games, averaging about 7 (again) and he remains in the squad to this day.

A pretty new signing, only having played for Concord for a year. Gabriele was the rock at the centre of our defence last season, playing 39 games and averaging 7.06. He signed for £1m (£2m with appearances) and is now worth £7.5m. Our most talented defender so far.

Narrowly beating out Davide Mondonico, this giant of a man joined us in League Two, and left us in the Championship after successive promotions. His influence was huge, and his presence from corners during our season in League One was an important source of goals. 105(18) games, 6 goals and an average of 7.07.

It had to be Max. Signed as a centre back, we immediately re-trained him as a winger, and he flourished. He made huge strides in training both physically and with traits, and made the right wing berth his own. Three and a half seasons on loan from Bolton, he eventually signed for us for £500k. 254(11) games, 29 goals, 65 assists and a whole lot more, averaging 7.25. Concord Icon that the game still treats like a CB: 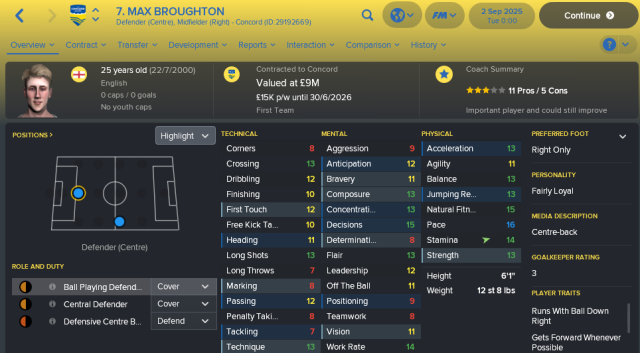 The only player in this team who was at the club at the very start. He won three successive Fans Player of the Year awards in the early game. The Championship was a step to far for him, but he was a key ingredient in our climb up the pyramid. 226(14) games, 36 goals, 52 assists, averaging 7.20. Concord Legend, Golden God.

Another relative newb, but he’s made a hell of an impact. By far the most creative central midfielder we’ve had during the save, he was chucked straight into Premier League football at 18 years old, without being able to speak the language, and took to it like a duck to water. 37 games, 4 goals, 4 assists, averaging 7.13. The heartbeat of the team, and a newly minted wonderkid:

This was a tough choice, but Dreher edges out Kyron Farrell, as we nicked him from stinkin’ Southend. His energy as a ball-winning midfielder has been essential in combating our lack of numbers in the middle of the park, and his leadership of the squad cannot be underestimated. 102(12) appearances in just three seasons, scoring an impressive 17 goals with 10 assists, averaging 7.15.

Joined us on a free after Liverpool released him, later sold to Preston for £600k, who then bizarrely loaned him back to us for three straight years until we signed him on a free again. The big target man played 175(29) times, scoring 102 goals in the process. He laid on another 40 on his way to averaging 7.17. My top scorer, and another Concord Icon.

I was tempted to go with Fabio Alagna here, especially seeing as Longman was a specialist “supersub” a lot of the time, but I couldn’t leave him out. His goals helped us to two promotions, and almost single-handedly led us to our only cup triumph in the Checkatrade Trophy (his 11 goals stand as a record in the competition). 78 starts, 70 substitute appearances, leading to 77 goals and 30 assists.

Leon Lobjoit didn’t do much for Concord, apart from getting us promoted to League Two. Coming off the bench in the second half, he turned a gutting defeat into a glorious victory, banging in two goals in the last ten minutes in the most joyous result I can ever remember.

Sure it was an under-23 side, but we mullered them after an impressive run to the final. A trademark Manny Monthe header, followed by braces from Denville Gumbs (name of the save) and record breaker Ryan Longman giving us our one and only cup success.

A true backs to the wall effort. After a terrible run of form, this win, snatched with an 88th minute winner from Fabio Alagna, was the catalyst that turned a potentially disastrous season, into a miraculous one.

So FM18 is over. At least for this blog. I’d say there’s a fairly decent chance I’ll step back into the save in my own time, as leaving The Beach Boys at this point in the season seems like a shame. I’d at least like to see how we fare in Europe, but I doubt I’ll blog it. Maybe I’ll stick something on Slack if I get around to it.

This has without a doubt been my fave FM save of all time, and it’s not even close. My only regret (and it’s a big one) is that it took me so long to buy the damn game. With just another month, I could’ve got through at least one more season.

Huge thanks to everyone that has given this a read over the past few months, and particular thanks to the many fine people that have helped with feedback and advice. It’s been fun to play, write and interact with folk. I hope you’ll join me for whatever FM19 brings…

This entry was posted in Gaming and tagged Concord Rangers, FM18, Football Manager 18. Bookmark the permalink.